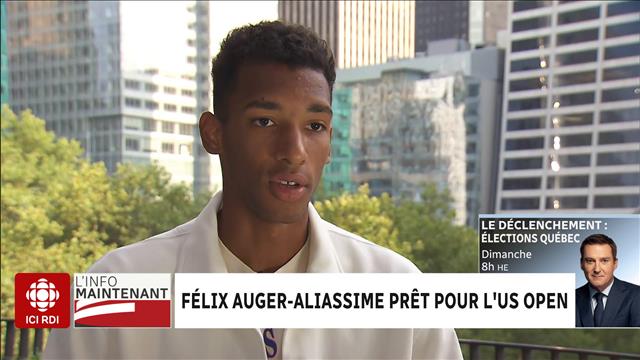 I felt like a child finding her playground, I had a lot of fun, said the 13th seed in a press briefing. I want to try to have fun and stay here for the full two weeks, but I’m going to take my tournament one game at a time.

The answer is agreed, but nonetheless true. When a reporter mentioned the fact that the great Serena Williams could cross her path on the 4th lap, Fernandez did not know it.

It’s her trainer, and dad, who looks at the board for her and announces her opponent only when the duel is confirmed. For now, she only has Frenchwoman Océane Dodin in mind.

However, the 19-year-old would love to face Serena, especially in New York.

To face her here would be the realization of a dream because we always dream of facing the legends and the players that we have always admired. No matter the outcome, you want to be able to spend time on the pitch with the best, but not just in training.

She inspired everyone. Personally, she showed me how to be strong, independent and how to fight for your dreams. She still motivates me today and I hope to achieve a quarter of what she has achieved in her career. I am sad that she is leaving the sport.

The retirement of Serena Williams has also made its way into most of the press briefings held today. From Nadal to Iga Swiatek, everyone had the opportunity to sing the praises of the American, who however did not address the press on Friday.

It’s not a new revelation, but Jorge Fernandez was inspired by Richard Williams, a chapter of whose life was told by an American film.

My dad did his homework with all the dads who helped their kids get to the ATP or the WTA. He looked at what Maria Sharapova’s father was doing, Andre Agassi’s father and even Pete Sampras. We learned from what they did and we tried to do the same, in our own way.

When we see that these families are successful, it motivates us to do the same, knowing full well that it won’t be easy and that there are pitfalls. And that won’t change.

Pitfalls, Fernandez has had this season.

Slowed down by a stress fracture in the foot at the Roland-Garros tournament, she had to skip the entire grass season. She returned to Toronto in early August and has won only one of her two games since.

In fact, a lot of water has flowed under the bridge since her final loss to Emma Raducanu in 2021. Her grand slam performances have been spotty. Eliminated in the first round in Australia in January, she reached the quarter-finals at Roland-Garros.

I’m happy with the way I performed, but obviously it wasn’t what I imagined. I thought everything was going to be perfect, but I also knew that there were going to be obstacles, difficult times and that I would have to find solutions.

The last year has been a real learning experience and I learned a lot about tennis, but also about myself, what I like to do and what helps me when things are not going well. I try to be a better person and enjoy my life on the pro circuit.

If her answers are sometimes agreed, somewhat by the repetition of questions week after week all around the planet, the freshness with which she partly charmed the New York public last year has not left her entirely.

Discussion with Antoine Deshaies on Canadian players at the US OPEN.

She spoke candidly when asked about the balls used in New York for women’s games. They are a little lighter than those used by men.

Several players, including world number one Iga Swiatek, have expressed dissatisfaction with their use. Leylah Annie Fernandez prefers not to waste any sleep or energy on the subject.

Right now, I’m just happy to be able to hit tennis balls, the little left-hander said with a laugh. I remember that years ago, I sometimes had to play with multicolored balls or table tennis balls.

We have a tennis ball, a court and a net? It’s all you need to compete, put on a good show for the spectators and have fun.

This is what she did last year, free from any pressure or expectations outside her intrinsic motivations.

The biggest difference this year is that even more than the public, her rivals know a little about what to expect from her.