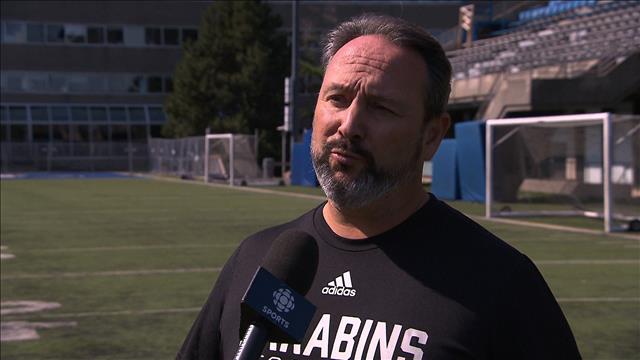 For the first time in their history, the Carabins took a slight advantage over their eternal rivals by sweeping the series of two games in 2021, before winning the Dunsmore Cup, emblem of Quebec university football.

In total, the Blues have won the last four clashes and five of the last six. But, contrary to what the leader of the Coalition avenir Québec François Legault might say, there is no question of looking down on the Quebec team.

Veteran Julien Le Guéhennec does not believe the Rouge et Or players will be triply motivated by the three setbacks of last year.

” I don’t think either side needs any extra motivation considering the history behind this clash. I think that any self-respecting organization, both them and us, prepares with the same standards. »

However, the Carabins will not be able to count on the thunderous support of their supporters which has characterized their local games for several years.

Due to work at the CEPSUM, the UdeM team will have to play all of its home games on the grounds of Collège André-Grasset, at the Claude-Robillard complex.

The stands will accommodate fewer spectators and the sound will not be amplified by the echo of a concrete roof as at the CEPSUM.

After the pandemic years where they lost a full season, the Carabins players have no intention of letting themselves be bothered by a small move.

One of the things our coach often tells us is: “adjust and adaptyou.” We haven’t had a game there yet. So, it is not known if it will be an advantage or notphilosophically declared Le Ghéhennec.

Whether you play on a concrete parking lot or at the CEPSUM, the preparation is the sameadded the 25-year-old defensive back.

The Rouge et Or will arrive in Montreal after decisively winning their first two games against the universities of Sherbrooke and McGill.

The former Spartans of Old Montreal exceeded the 300-yard plateau in each of his two games thanks to his growing complicity with receiver Kevin Mitale.

Mitale has already caught 12 passes for 200 yards and scored 5 touchdowns, including 4 against McGill last week.

The Carabins will have to pay special attention to him. Head coach Marco Iadeluca is well aware of Mitale’s potential. A guy like him, you won’t be able to stop him. You just have to limit the damage.

He’s a really good pass receiver. He’s still going to make games. The idea is to limit the number of games and the length of these gameshe added.

The Carabins have only played one game so far, a 26-18 victory over the Concordia Stingers.

Quarterback Jonathan Sénécal was once again up to the job. He completed 21 of 27 passes (77.8%), including 3 for touchdowns.

In his three confrontations with the Rouge et Or in 2021, Sénécal had completed 63% of his relays for 908 yards. He had thrown six touchdowns against a single interception.

The Carabins and the Rouge et Or will meet for a second time on October 16 at the Telus stadium at Laval University and, perhaps, in the Quebec final on November 12.

However, there is still plenty of football to be played until then.