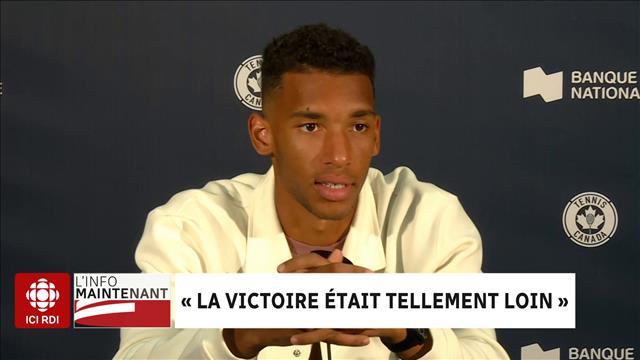 The Quebecer broke his opponent’s serve on a shutout, but lost his own five times in a row. Ruud chained 10 consecutive games to place the 9th world on the edge of the abyss in front of a crowd as dumbfounded as Auger-Aliassime seemed paralyzed by the moment.

Unlike Thursday, when he offered his best imitation of Jesus walking on water, nothing worked in this quarter-final match for the sixth seed.

Maybe my expectations were too high because of yesterday’s game. I was trying to recreate that rather than playing around with the tools I had at my disposal today. I forced my strikes and my targets. At some point, it felt like I wasn’t due to win. I still felt good after the first set, but losing my first two service games in the second set made it difficult.analyzed Auger-Aliassime.

Casper Ruud crushes Félix Auger-Aliassime in two sets of 6-1 and 6-2 in the quarter-finals of the National Bank Open in Montreal. The Quebecer answers questions from journalists.

Auger-Aliassime alternated unforced errors, 16 in the only 36-minute first set, and unstable serves, light years from his level the day before, to hand victory on a silver platter to Ruud.

Auger-Aliassime finished the match with 56% of points won behind his first balls – he had won 92% on Thursday – and only 2 of the 15 points disputed on his second.

It was a fifth appearance in the quarterfinals of a Masters 1000 category tournament, but a first in front of its audience in Montreal. To do better, he will have to wait at least two years, the men’s leg of the tournament stopping in Toronto next year.

I try to learn from all the matches, in victory as in defeat. I’ll see what I can get out of this one. Afterwards, the important thing is to see how I will react, he underlined. It’s not usual for me to play two good matches and lose a match like that or end a tournament like this.

I didn’t have a good start, but I was able to turn the wind around. We’ve seen Felix play better tennis before, but I was also making him play more balls, that was the goal.mentioned Ruud.

Ruud (no 4) therefore joined Hubert Hurkacz (no 8) in the semi-finals. The other poster will oppose the Briton Daniel Evans and the Spaniard Pablo Carreno Busta. Evans won his match 1-6, 6-3 and 6-4 against American Tommy Paul, while Carreno Busta eliminated Briton Jack Draper 7-6 (7/4) and 6-1.

It will be a tough match against Hubert. He is a very good player, dangerous, especially with his serve on hard surfaceadded the Norwegian.

With Nick Kyrgios released earlier in the day, for the general public, these semi-finals will leave a little bitter taste, in the worst case, or the opportunity to discover new players, in the best.

The first two sets were very close, the games went by, to the point that neither player could break the other. Hurkacz, No. 10 in the world, was the most solid, especially in defense, in the first decisive game to pocket the first set.

Kyrgios, who often appeared nonchalant in this match and uncharacteristically calm despite having his back to the wall, pulled out all the stops in the second tiebreaker, helped in particular by the net boards to escape 4-2, after a superb series amortizations and counter-amortizations.

The Australian, who confessed the day before to feel tired from chaining the matches, seemed to complain about his ankles between the second and the third round, during which he ran little. He collapsed in that last run.

My body didn’t feel great during the week, Kyrgios admitted. I had abdominal pain before the game, my knees hurt so obviously when you start playing and you stop for a few minutes, it doesn’t help your body, the Aussie said of a break taken by Hurkacz between rounds two and three. My body was stiff and I couldn’t move properly.

It was not until the start of the third set that a service was finally broken, that of Kyrgios. The Australian was broken again in the sixth game, and Hurkacz took only a handful of seconds to close the books on his serve in the next game.

This is the first time that the Pole has reached the last four at the National Bank Open. He will be looking for a sixth title, a second in Masters 1000.

Hubert Hurkacz is the eighth seed in the tournament.