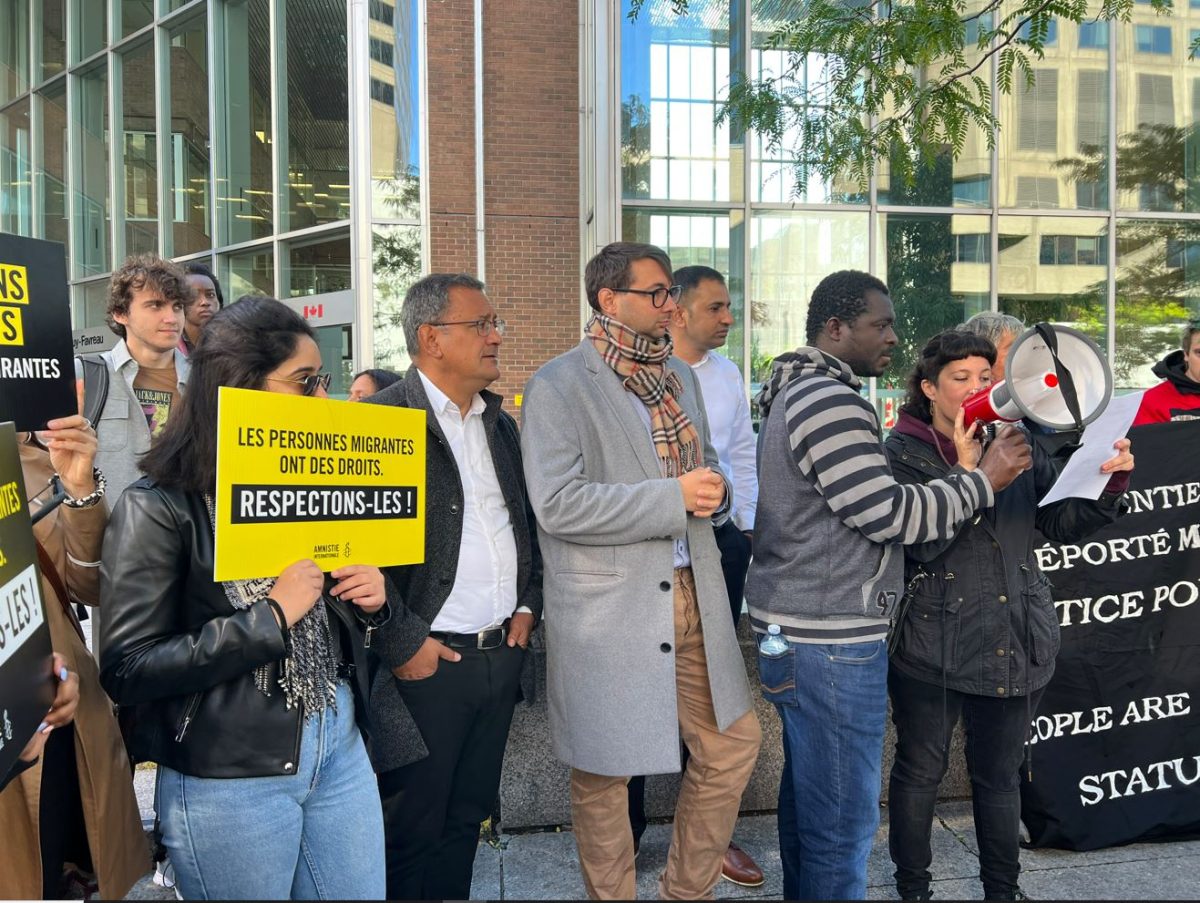 Around 10 a.m. this morning, in front of the Guy Favreau complex, on René-Lévesque boulevard, Mamadou Kanoté greeted with a smile each newcomer who came to support him, despite his uncertain fate. An emergency vigil has been organized in front of the building housing the Immigration and Refugee Board of Canada, as the man from the Ivory Coast has received yet another deportation order set for 30 september.

If the name “Mamadou Konaté” rings a bell for you, it’s because his story was shared across Quebec during the first wave of the pandemic. It is about this essential worker repeatedly detained at the Laval Immigration Monitoring Center (CSI) and threatened with deportation, for lack of being able to regularize his immigration situation during his stay in Canada.

The precariousness of his immigration status is based on the fact that article 34 of the Immigration and Refugee Protection Act prevents Mamadou Konaté from filing an asylum application.

This legislative provision provides for the inadmissibility of territory for security reasons to a person who has been directly or indirectly involved in “acts aimed at the overthrow of a government by force”, an accusation refuted by Mamadou Konaté.

In this regard, his lawyer, Me Guillaume Cliche-Rivard, declared, in an interview with Subway on September 22, having filed a request for ministerial exemption to grant his client the right to stay, because “he does not constitute a risk for Canada”. Mr. Konaté was allegedly forcibly recruited by a rebel group opposed to the government and was only assigned to household chores.

Where the shoe pinches is that such a request would take “six to seven years before being processed”.

“He filed it a year and a half ago. There are still 4 and a half or 5 years left”, specifies Me Cliche-Rivard.

Having only a few days before the fateful date of his expulsion from the country, Mr. Konaté would therefore have unsuccessfully asked the border services to postpone the date of his deportation.

“Now I have to go to the Federal Court against this decision not to postpone [la date d’expulsion], continued the lawyer. The judge has the power to say: ‘Yes, we put the deportation on hold, we go through with this case and we allow him to stay here’, or ‘No, he has to leave’. If the decision is no, we will challenge the [Comité des droits de l’homme des] United Nations. We are ready to do it.”

The risks of return

“The risks of Mamadou’s return to Côte d’Ivoire have not been assessed by the Canadian government since 2018, argued his lawyer. It’s been four years since we questioned whether the security and political situation in Ivory Coast allowed his dismissal. A lot has happened in the past few years. The security situation has really worsened, there is political repression like never before with the destabilization of the current government. There’s a lot of tension.”

“The person who is looking for him and who wishes him harm is today a lieutenant-general of the army in the Ivory Coast, added Me Cliche-Rivard. We have not assessed his ability to attack Mamadou either.

A report signed by the Director General of Amnesty International in Côte d’Ivoire would conclude that the prospect of Mr. Konaté’s removal would have serious consequences for his security and integrity.

“When Mamadou Konaté disembarks from the plane, he will be arrested, detained, interrogated, and perhaps tortured,” summarized Me Cliche-Rivard.

“Everything a man should do, I’ve done”

“I have never committed a crime, meanwhile supported the principal concerned. I contributed like everyone else. What did I do? I have a work permit. I work at Concordia University, I have a stable job. What is the problem?” he insisted, addressing the people present at the rally.

A representative of Solidarité sans frontières, Ze Bénédicte Carole, asked those present to think of “all these [personnes] without status who have sacrificed themselves during the pandemic, who have given so much to keep Canada on its feet”.

“They are ready to sacrifice themselves, not as slaves, but as human beings, like you and me. In Canada, we sing freedom for all every day, but there are still men who are not yet considered human, she lamented. We are just used as objects to work with. Afterwards, when we have done service like Mamadou, we are sent back to our country because we realize that we are no longer needed.

Subscribe to our newsletter and receive a weekly summary of Rosemont news.

I agree to receive communications from Journal Métro