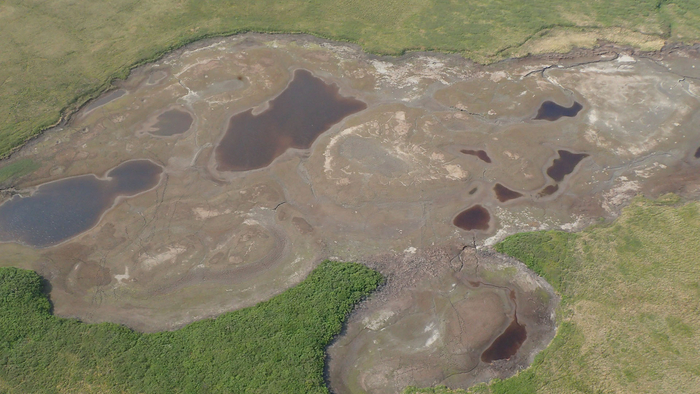 Recent work shows that a large part of the lakes in the Arctic regions have shrunk in surface area over the past 20 years, which would be a consequence of global warming and the melting of permafrost.

The American researchers used satellite images of a large portion of Arctic space in Russia, Alaska, Greenland, Canada and the Nordic countries, covering the period from 2000 to 2021.

They noted a decrease in the size of the lakes, or even a complete drying up of the bodies of water, in 82% of the space under study.

A prevailing theory was that the tundra lakes gradually increased in area during this century due to the accelerated warming and some melting permafrostnotes the team of Elizabeth Webb, a biologist at the University of Florida.

However, researchers find In this study rather the reverse is happening. They argue that thawing permafrost contributes to shrinking the area of ​​lakes by creating drainage channels and increasing soil erosion at the bottom of water bodies.

Lakes make up between 20 and 40 percent of the Arctic lowlands, scientists point out, forming the cornerstones of the Arctic ecosystem.

They represent an essential source of fresh water for local indigenous communities and industries. Many threatened or endangered species, including migratory birds and fish, also depend on the habitats of these lakes for their survival, the researchers note.

“Our results suggest that permafrost thaw is happening even faster than previously expected. [la communauté scientifique]. It also indicates that the area is likely on the way to large-scale drainage,” Elizabeth Webb said in a statement.

In addition to rising surface temperatures, climate change is bringing more precipitation to Arctic regions in the fall, the researchers note. This would accentuate the drainage effect at the bottom of the lakes, since the rainwater is warmer than the ground and thus contributes to accelerating the melting. Sudden heavy rains also create runoff that amplifies the phenomenon of erosion.

Some climate models that have been used so far to predict future fluctuations in Arctic lakes did not take into account this increased precipitation in autumn due to warming, the researchers point out.

“It may seem counterintuitive that increased precipitation reduces surface water,” says study co-author Jeremy Lichstein. “But it turns out that the physical explanation was already in the scientific literature: rainwater carries heat into the ground and accelerates permafrost thawing, which can open underground channels that drain the surface,” continues -he.

The melting of permafrost, which contains frozen organic matter and methane at depth, does not bode well for the climate, say the scientists. Indeed, when the permafrost has melted, the microorganisms then begin to degrade this organic matter made available by emitting GHGs. Methane trapped in the ground can also be released, which amplifies the warming phenomenon.

Thus, the reduction in lake size affects the northern Eurasian continent more strongly than the northern American continent, the researchers point out, possibly because the Eurasian area under study has a greater concentration of thermokarst lakes, formed by thawing permafrost, they write.

The study was published in the journal Nature Climate Change.